The NFI was looking for an original Christmas gift for clients and staff, a gift with attention to the specific products and services of the NFI. The NFI provides high-quality forensic analysis.

Together with the experts of the NFI Spel-Maker designed a board game for the whole family in which players take on the role of a forensic detective. During the game, players collect clues and forensic evidence from 3 crime scenes and present the evidence to the NFI to be examined.

Game summary
In the region of The Hague three banks have been raided simultaneously. In all three robberies the criminals used explosives and the same type of flight vehicle. There are two possible scenarios: All three attacks were the work of the “Gang of Ypenburg”, or the criminals are unrelated.

During the game the players collect evidence from 3 different crime scenes. If a player has collected 9 pieces of evidence the player gets access to the NFI 1 by 1 all traces will be examined. The first player to prove Scenario A or Scenario B wins the game. 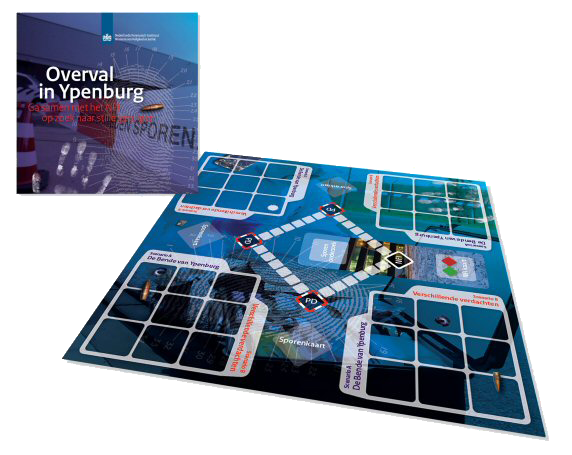